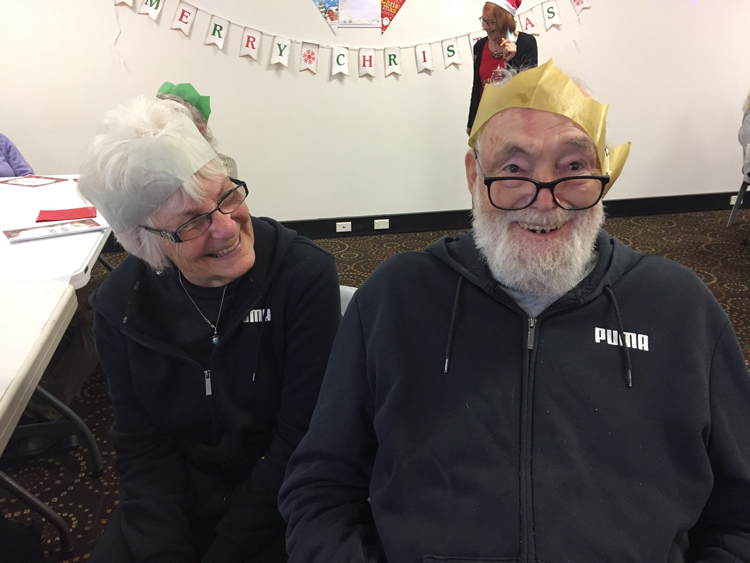 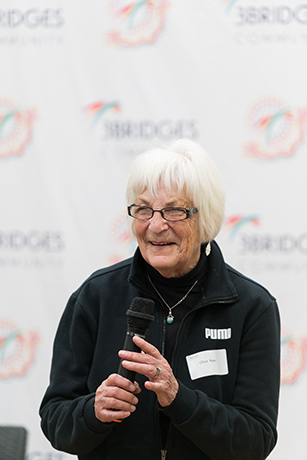 Here’s a little bit of my story and how I ended up at the 3Bridges group, how I chose it.

I’m just going to go back briefly, to I think 8 or 9 years ago when we, in the family, we noticed Len, my husband, acting a little bit strange and what we should do about it.

At the time he was actively working in the Men’s Shed, he was also a volunteer with Sydney Heritage Fleet, he was enjoying that too, carpentry was his interest and he was working on the Kanangra, the old ferry, and he loved it but dementia was showing and things were getting difficult.

The Men’s Shed was good at the time, but it was a shipyard he was working in at Sydney Heritage Fleet, and they finally said “look, its an occupational hazard, we’ve got equipment here and I really think he can’t come any more.” Len really didn’t understand that at all, the Men’s Shed stayed with him for longer, they beared with him, they tried and they helped but then he was walking out. We were finding him on the train heading out somewhere, so we had to do something about it.

So I started to search, I searched for where he could go to a group and who would accept him. At that stage I wasn’t thinking about me, I didn’t need a group I was ok I was doing things. I was really looking for somewhere for Len and I started to Google what we should do, I looked around, tried places. There was a community group very close to us, and I knew if Len went there he would find his way just down the street back home. Had a lovely day there with them, came back I thought “Oh this is going to be good!” and horror, the phone call came and they just said “No we can’t take him, we can’t be responsible for him.” Now at that stage, they offered no help, no advice, what I could do “if you could come along, maybe” or “if you could get a carer, maybe bring him along he’d be ok” but no we didn’t get any advice like that at all.

I thought at one stage we were going to another organisation, I took Len along with me, anyone with people with dementia will know that they talk out, they don’t necessarily go with the conversation and for me that was very uncomfortable. I felt for him, I felt for people around who didn’t really know what to do, so that one finished as well.

I don’t know, somehow or other, I don’t know exactly when it was, but we heard about 3Bridges and they were just down road in St. Peter’s in the church hall, and they were there so I went off, “oh yeah, come, come they said” and I went there and from the moment I walked through the door of that hallway I was welcomed and not only was I welcomed, Len was welcomed. And that was the difference, there was acceptance.

And we sat down, other people in the group accepted him, there was no uncomfortable. If he wanted to talk, they would stop “now wait a second, Len’s got something to say” and we would listen and it was such a difference. I think that, one of things I want to say about the 3Bridges group, is the total acceptance, whoever comes through the door. It was probably a week later, Rhonda (Manager, Social Groups) came to visit, and she then took me to one side, I was still talking about the group for Len, not for me she never said, “oh no, that’s not a good idea” she just went with the flow, that’s alright, fill out the paper, talked about it. But I can tell you, he never went on his own, I always went with him and now I’m going on my own! We have moved on a few years now and I just love it, I just love it. Over that time, that’s where I learned about 3Bridges, and the dynamic team that they have that work with the aged people, whether they have dementia, whether they’re on wheelie things or sticks or whatever it is, they have this great team of energetic, creative, young people, obviously driven and its just been such a good answer to us.

An example of total acceptance, might have been a Christmas party, when 3Bridges gets everyone together, there’s entertainment, music and food. When the music started, Rhonda came across the floor, and she came to Len and said “Let’s dance.” She took him up and danced with him, still chokes me to this day that she did that for us. And that is total acceptance, total acceptance is what you get with 3Bridges, whatever, whatever your situation is. 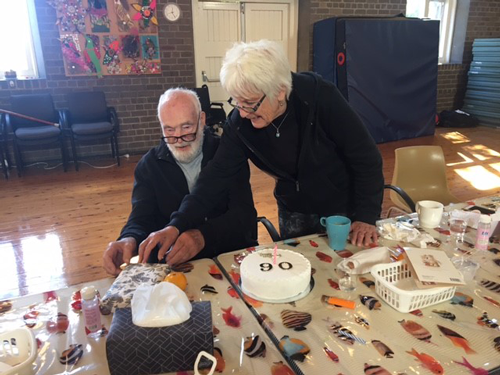 Its stories like these that make up the fabric of 3Bridges and our connection to the communities we work and live. Thanks go out to Olive and Len for their generousity to share their story.

To learn more about our support programs for seniors and services that provide community connection, please contact us at 1300 327 434 or email admin@3bridges.org.au.